About the Film Project 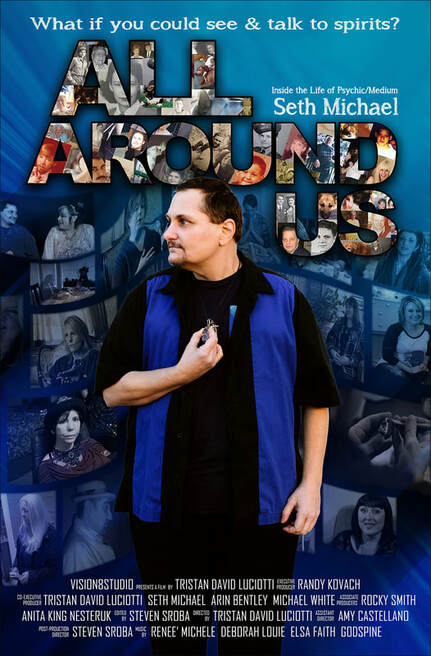 A note from the director - Tristan David Luciotti: I first met Seth Michael in the summer of 2015 and knew I had to make a film about him. I hadn't touched a camera in many, many years (since college), so this was a learning curve for me. The outpouring of support from our Kickstarter campaign is what got us from 2015 to 2019 with our finished film, along with the help of many amazing people!

I've spent the majority of my life being very interested in the supernatural - from past lives to the paranormal. Being raised a Pentecostal Christian, you can imagine the struggle since I was taught to stay far away from these "evil" things. Thankfully, I didn't allow fear to rule my life; instead, I had a hard time ignoring what I believed in, especially after my own share of paranormal experiences.

In ALL AROUND US, we explore many different topics while learning from individuals who are experts in the afterlife, parapsychology, science/physics, and mental health.
​
This is a ground-breaking documentary film that takes an intimate look inside the life of natural-born Psychic/Medium Seth Michael. ALL AROUND US shows the raw reality of both the struggle and beauty of being born with this gift. You will encounter healing for those who are living as well as passed on, including pets. This will cover all types of spirits, spirit counseling, locations from Port Townsend, WA all the way down to Sedona, AZ, paranormal investigations with White Light paranormal team (including "resolves") and the intimate, personal video diary footage from Seth. Questions will be answered from the other side and we hope you will walk away with an expanded view of life and beyond. This is not a Hollywood film for entertainment purposes, but a raw documentary, to let you take a peek inside the untouched reality of the spirit world. ​

​An interesting twist to this documentary is the fact that the filmmaker is a Christian. Embarking on a film on this sensitive topic for him takes courage. “I have had my share of experiences in my life and it’s important to show this isn’t a Satanic gift that Seth has. It’s actually beautiful and I’m not afraid of any backlash I get from making this film. I think once people see this they may look at things in a brand new way. It’s already been a fascinating journey.”

"When the filmmaker asked me to do this with him, I had no hesitation to look into a life of a psychic medium, because I know a film like this is going to be with heart and truth. It won't be like any other one out there and even though I will be the "main character", it will feature my friends that I do several projects with during our interactions and glimpses into their lives. And it will branch off even more with clips of all the different kinds of readings I do, and some cases we have had as a paranormal team and just on my own. But also, the filmmaker wants to go deeper into what being connected to that other realm is like from my own perspective which includes some of the difficult parts of it as well as the joys. This is going to be a very important film."
- Seth Michael